We look back at Strachan’s achievements.

On this day in 1989, Gordon Strachan made his Leeds United debut in a 1-0 victory over Portsmouth at Elland Road.  Strachan wasn’t the only new face in the Leeds side that day, with fellow new recruit Chris Fairclough also included in the side for the first time as Ian Baird’s goal secured the Whites all three points.  Strachan’s appearance against Portsmouth was the first of 245 outings he would make for Leeds.

Manager Howard Wilkinson who had arrived in the previous October from Sheffield Wednesday had at this point steered the side away from the threat of relegation and was now intent on building a side to challenge for promotion in the following 1989/90 season.  The arrival of Strachan from arch rivals Manchester United was seen as a major coup for the club.  Like Wilkinson, Strachan dropped down from the First Division to join Second Division Leeds and arrived with a glorious playing career, having won the Scottish Football League twice, the European Cup Winners’ Cup and European Super Cup with Aberdeen, along with the FA Cup at Manchester United.   Wilkinson, managing director Bill Fotherby and chairman Leslier Silver all played key roles in persuading Strachan to move to Elland Road and it went on to be one of the most successful periods in the club’s history. 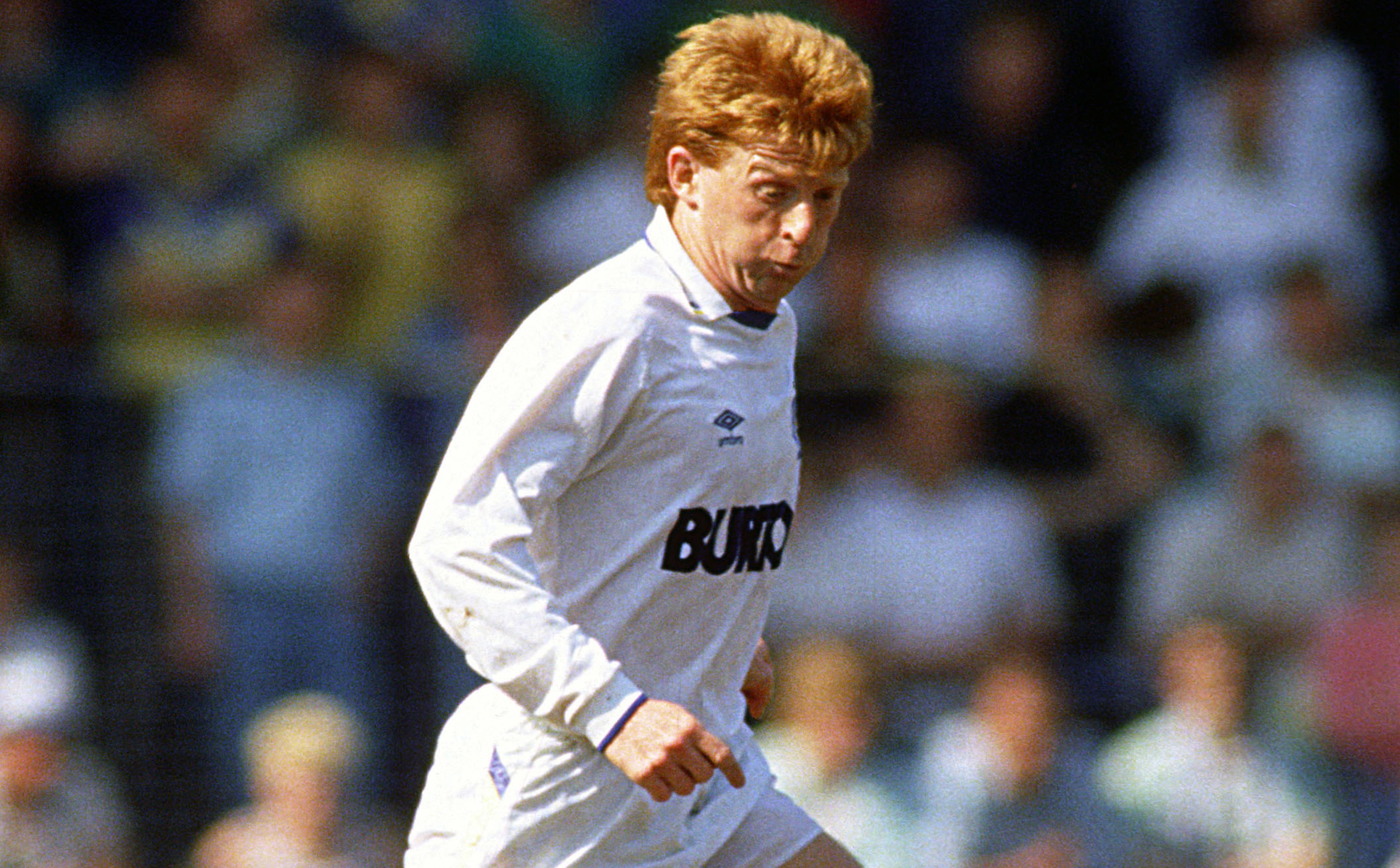 Wilkinson named Strachan as his captain for the 1989/90 season.  The Whites manager made more additions throughout the summer and five players made their debuts in the opening day defeat away at Newcastle United.  Strachan scored his first goal of the campaign in a 1-1 draw away at Stoke City in September.  He scored his only hat-trick for the club against Swindon Town as the Robins were defeated 4-0 at Elland Road as Leeds made it six unbeaten in the league following the opening loss, moving up to fourth spot.

In November, Strachan netted in back to back home games as Plymouth were beaten 2-1 and AFC Bournemouth defeated 3-0 as Leeds’ unbeaten league run reached 15 games, with the club now sitting in second spot.  He then netted for his third straight league match, but Leeds’ good run came to an end with a narrow 4-3 defeat against Leicester City at Filbert Street.  Throughout January and February, Strachan once more scored in three straight league matches against Stoke City, Swindon Town and Hull City.

In our final home match of the season, Strachan scored a vital goal in the 84th minute with a fabulous strike from the edge of the area.  Leicester City were defeated 2-1 at Elland Road and it meant Leeds went into the final day of the season away at Bournemouth top of the league, knowing victory would secure both promotion and the Second Division Championship.  Strachan led Leeds out at Dean Court and Lee Chapman’s goal secured the Whites a 1-0 victory and promotion to the top flight.  Strachan followed in the footsteps of Jim Baker and Bobby Collins in captaining Leeds to glory in the second tier, playing in all 46 league games and scoring a total of 16 goals.

🔥 "Have you ever seen a better goal, and seen one better timed?" https://t.co/IYP90JQ6Ee pic.twitter.com/5m9ADWnWpm

Gary McAllister was brought in from Leicester City ahead of the 1990/91 First Division campaign and he formed the final piece of an iconic midfield, including Strachan and young duo David Batty and Gary Speed who had come through the ranks at the club.  The Whites began life back in the top flight with a 3-2 victory over Everton at Goodison Park and Strachan scored his first goal of the season in a 2-0 victory over fellow newly promoted side Sheffield United at Elland Road.  He netted against Arsenal in September before again netting three in a row against Nottingham Forest, Manchester City and Derby County in November.  He was on the score-sheet against Everton and Luton Town and also helped the club reach the semi-final of the League Cup, but the Whites were defeated by Manchester United over two legs.  Strachan ended the season having played in 34 of Leeds’ 38 league matches, scoring seven goals.  Leeds finished fourth place in the first season back in the top flight, picking up 64 points.

Wilkinson strengthened the side again for the 1991/92 campaign, in what was the last ever First Division, prior to the formation of the Premier League.  Leeds made a great start to the campaign going 10 games unbeaten, with Strachan netting a brace in a 4-0 away win at Southampton, along with efforts in a 2-2 draw with Arsenal and 3-0 victory over Manchester City at Elland Road.  Strachan missed Leeds’ first league defeat of the season against Crystal Palace and the Whites went 22 First Division matches undefeated with Strachan in the side, before falling to defeat away at Oldham Athletic in February 1992.

﻿Leeds and Strachan’s former club Manchester United had been neck and neck in the race for the title throughout the campaign, but Leeds’ hopes suffered a major blow after a 4-0 defeat at Maine Road against Manchester City left Manchester United a point ahead of Leeds with two games in hand and a total of seven left to play.  After both sides drew on Saturday 18th April, Manchester United had gained a two point advantage and had four games left to Leeds’ three.  However with the title looking like it was heading over the Pennines, there was a final twist.  Strachan captained Leeds to victory over Coventry City, whilst Manchester United were defeated at home to Nottingham Forest, which saw Leeds go top.  The Red Devils then lost their game in hand away at West Ham and on Sunday 26th April, Leeds went to Bramall Lane and defeated Sheffield United 3-2.   In the late kick-off, Manchester United lost a third game in a row at Liverpool, ensuring Leeds had won the First Division title for the third time in the club’s history.  In the final game of the campaign against Norwich City at Elland Road, Strachan became the second Leeds captain to lift the First Division, just as Billy Bremner had done in 1969 and 1974. 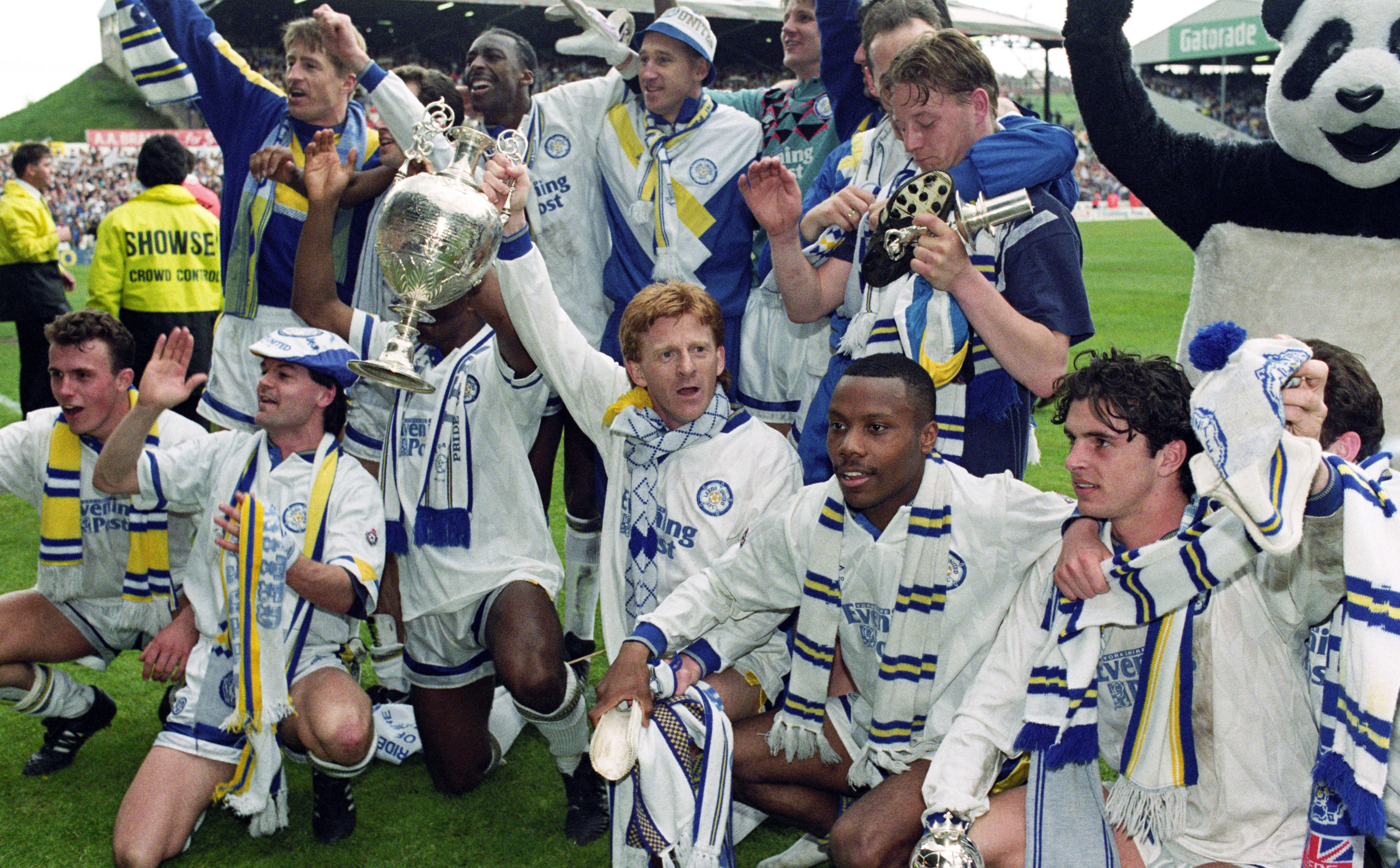 Strachan came on as a substitute in the 1992 Charity Shield victory over Liverpool and made 44 appearances in all competitions in the following season, scoring six goals and was named the club’s Player of the Year.  He was also awarded an OBE for his services to football.

The 1993/94 season was Strachan’s last full season at Leeds and he made 38 appearances.  His final Leeds match came in the 1994/95 campaign, on New Year’s Eve as Liverpool defeated the Whites 2-0 at Elland Road.  Strachan announced his retirement from football, before eventually being tempted to move to Coventry City in March 1994 to become a player coach, ahead of going on to manage the club.  He also went on to have managerial stints at Southampton, Celtic, Middlesbrough and the Scotland national side.

Strachan remains a club icon at Leeds United and remains the only captain to have lifted both the Second Division and First Division titles.

Help prevent the spread of Coronavirus by taking the following steps: