First-team star Jamie Shackleton was in attendance to meet with the Year 8 students that had been chosen to take part in the activities, half of which were from Cockburn John Charles and the other half from Cockburn School – with the aim of bringing students together from two schools located so close.

The Leeds United midfielder was on hand to find out what they had learned during the day and chat with them about the impact of making positive and negative choices. The 20-year-old also spent time handing out certificates to pupils that had excelled during the day, congratulating them and then inviting them to attend a match at Elland Road where they will form part of the guard of honour at kick-off on the pitch.

The educational event was delivered by coaches from the club’s official charity with the support of West Yorkshire Police and other organisations who gave presentations and spoke to the pupils about making positive choices and not making the same mistakes twice along with the best ways to deal with difficult situations. In attendance were employees in the medical profession talking about how to identify and deal with injuries, prison officers on hand to present statistics around knife crime and ex-offenders who could discuss their life experiences and how they’ve managed to turn their lives around.

The England Under-21 international spoke to LUTV after the event and said: “I’ve really enjoyed being a part of the work the Foundation have been doing today, I got introduced to a big group of kids and handed some certificates out then I got to speak to them about life choices – I’ve had to make some in my personal life and with football and we were talking about how our choices all have consequences.

“It was nice to be able to offer some advice and if that can help any of them in the future then that’s brilliant, it’s why we come down and show our faces at these community visits.”

Moudou Bojang, a student that took part in the event, said: “Today I learnt that positive choices moving forward can help you later on in life and poor decisions that you’ve made in the past can always follow you, being an offender not only effects you and your life but it has a ripple effect on your family and the people around you, therefore you need to consider your actions.

“It was good to have Jamie Shackleton here, he is an inspiration as to the life I want to lead later on, he worked really hard going through the academy system and getting into the first team and that is an inspiration for young people. Speaking with him, there were similarities about family and facing difficult times that I could really relate to.”

Mrs S Roberts, Head of School at Cockburn John Charles Academy, said: “This is a programme that has been a pilot in this city and in this school, bringing two schools together out of the multi-academy trust. It should be rolled out to schools across the city because it’s not just a problem for this area, it’s a national problem and it’s been great for our kids to hear some hard hitting messages from ex-offenders that have rehabilitated their lives and changed the way they work. Hopefully now they have the skills, strength and motivation to go away and make the right choices in the future.”

Steve Hartley, Leeds United Foundation coach, added:”We’ve had a collaboration between two schools today, Cockburn John Charles and Cockburn School and we’ve brought two sets of students together from Year 8 and delivered presentations to them from a number of guest speakers from the prison service, West Yorkshire Police, ex-offenders and personnel from the medical profession.

“What we’re trying to do with this project is give these young people choices to make, teaching them that their actions will have consequences so it’s really important for them to make the right decisions at the right time. It’s also equally important to understand if you do make a mistake as a young person then it’s down to them to learn from that and not make the same mistake twice.”

For more information on the Premier League Kicks programme and all of the different elements delivered by the Leeds United Foundation, please email Michael.Kinsey@leedsunited.com. 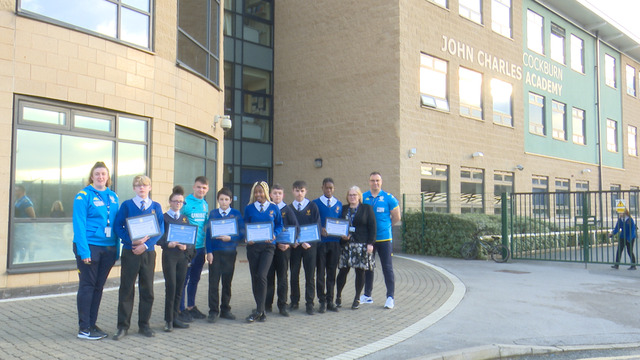