Leeds United and Wolves met in August 2005 in Leeds’ second game at home in the 2005/06 season. The Whites took all the points with a clean sheet recorded just for good measure, by debuting goalkeeper Ian Bennett, who’d joined Leeds from Wolves’ rivals Birmingham City in pre-season.

The visitors arrived on the back of a 21-game unbeaten run and in a confident mood. Managed by Glenn Hoddle, the one-time England boss was having a good period leading the Molineux club’s push for a top-six finish, to ensure them at the very least play-off football.

In terms of Wolves’ recent records at Elland Road, they had not won any on the hallowed LS11 soil in the top flight for near quarter of a century. They’d never won a previous August visit, and they’d buckled 4-1 back in the February of the previous year.

Kevin Blackwell wouldn’t see his Leeds troops dominate this clash so heavily – by full-time the teams finished level on corners and the Whites only 1% heavier in possession. But, Leeds defended in resolute fashion and had attacking options that would prove lethal both on the day and across the season moving forward.

After early open exchanges by both teams, it was the hosts who showed sharpness first. With eight minutes elapsed, full-back Frazer Richardson pressed well and dispossessed another full-back, the long serving Lee Naylor. Naylor had Leeds’ Gylfi Einarsson around him, causing him distraction, and could only look on with despair as Richardson travelled forward with intent.

Despite what some might have seen as a shooting chance for himself, the Yorkshireman had the modesty and maturity to see winger Eddie Lewis better positioned and more qualified. Lewis coolly tucked away Richardson’s pass past Michael Oakes in net for Wolves to put his side ahead. 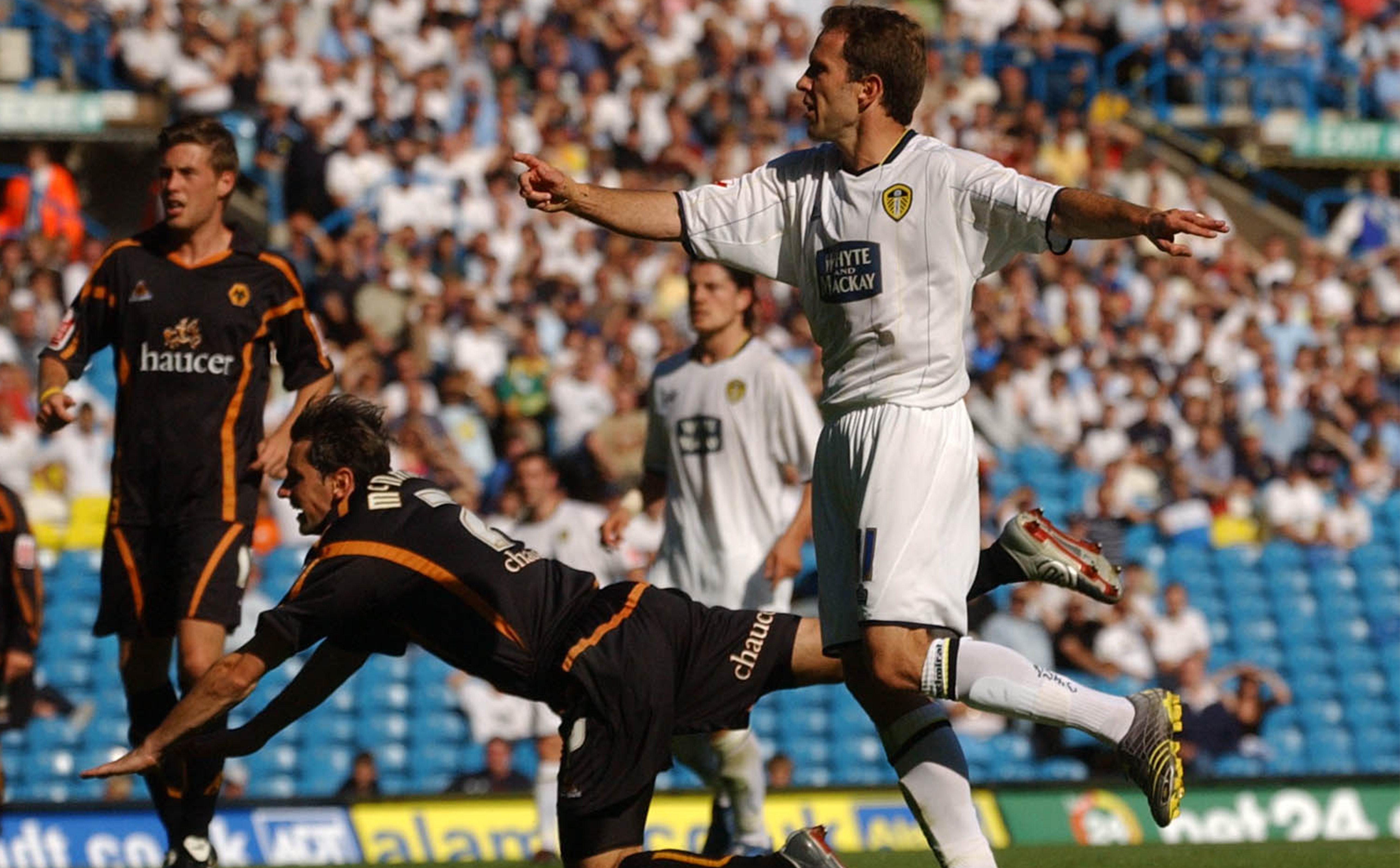 ﻿﻿﻿Eddie Lewis scored the opening goal against Wolves, in the 2-0 win.

Wolves would get into potential danger areas, but ‘Lady Luck’ wasn’t with Hoddle’s team as Kenny Miller saw his best effort crash off the crossbar. His other forays forward saw him snatch at the final execution or make the wrong choice.

While one boss became more and more frustrated, the younger of the pair in Blackwell tweaked Leeds’ formation, bulking the midfield with a player more than Wolves had in there. This aided the centre-back pairing of Sean Gregan and former Wolves man Paul Butler, leaving the visitors toothless in attack.

A busy period in the middle of the second half saw Leeds take off Robbie Blake for Jonathan Douglas on 58 minutes. A minute later Wolves responded by swapping West Midlands born midfielder Mark Davies on for Rohan Ricketts. What happens 60 seconds later? Leeds bag the second and final goal of the game through Rob Hulse, as the former West Brom marksman notched his first of 13 goals for the campaign.

Rob Hulse celebrates after netting the second goal of the game.

The goal owed a large credit to Leeds’ legendary right-back Gary Kelly. He attacked with poise and purpose enough so that, as he raced forward, Colin Cameron felt he must impede Kelly. Even so, Kelly quickly retrieved his footing and delivered a cross for Einarrson. He held off attempts at unnerving him and knocked the ball down for Hulse. Joleon Lescott, the nearest defender to him, could only watch on as his ‘keeper was now twice beaten by excellent finishing.

It was a hard-fought three points for Blackwell’s troops, showing a multitude of attributes that would leave them only beaten three times on home soil and in the play-offs come the end of the season, while Wolves fell short in seventh place.