‘Norman Hunter is one of the world’s top footballers- possibly one of the greatest players ever.  I used that particular sentence last season when I was talking about Billy Bremner, another one of those superb Leeds players without whom the club would not have been able to chalk up so much consistent success in the last decade.

I feel, you see, just the same way about Norman.  It makes it very difficult to know where to start when you sit down and write about a player and character like him.  It is one thing in football to have that star quality which makes you stand head and shoulders above the rest.  It is quite another to have the personal magnetism and leadership that are inestimable qualities in all the game’s great players.

Norman Hunter came into Leeds United’s first team some thirteen years ago now... but I remember it well.  It was in the days soon after I had taken over as manager.  The club were in the Second Division and fighting hard to stay there.  Elland Road itself was not the ground you see today.  If anyone outside the club had talked in terms of all that’s happened in that decade, you would have thought him a dreamer  – a romancer.

But it did happen... and one of those reasons it happened was because a man named Norman Hunter was wearing the number six shirt.  In 1961 I made the transition from player to manager.  In our junior ranks then were a couple of players whose early development was poles apart.  A young red-haired Scotsman called Billy Bremner had already won his way into the first team as an outside right.  The other was Norman Hunter.  But it was a Norman you just wouldn’t recognise today. 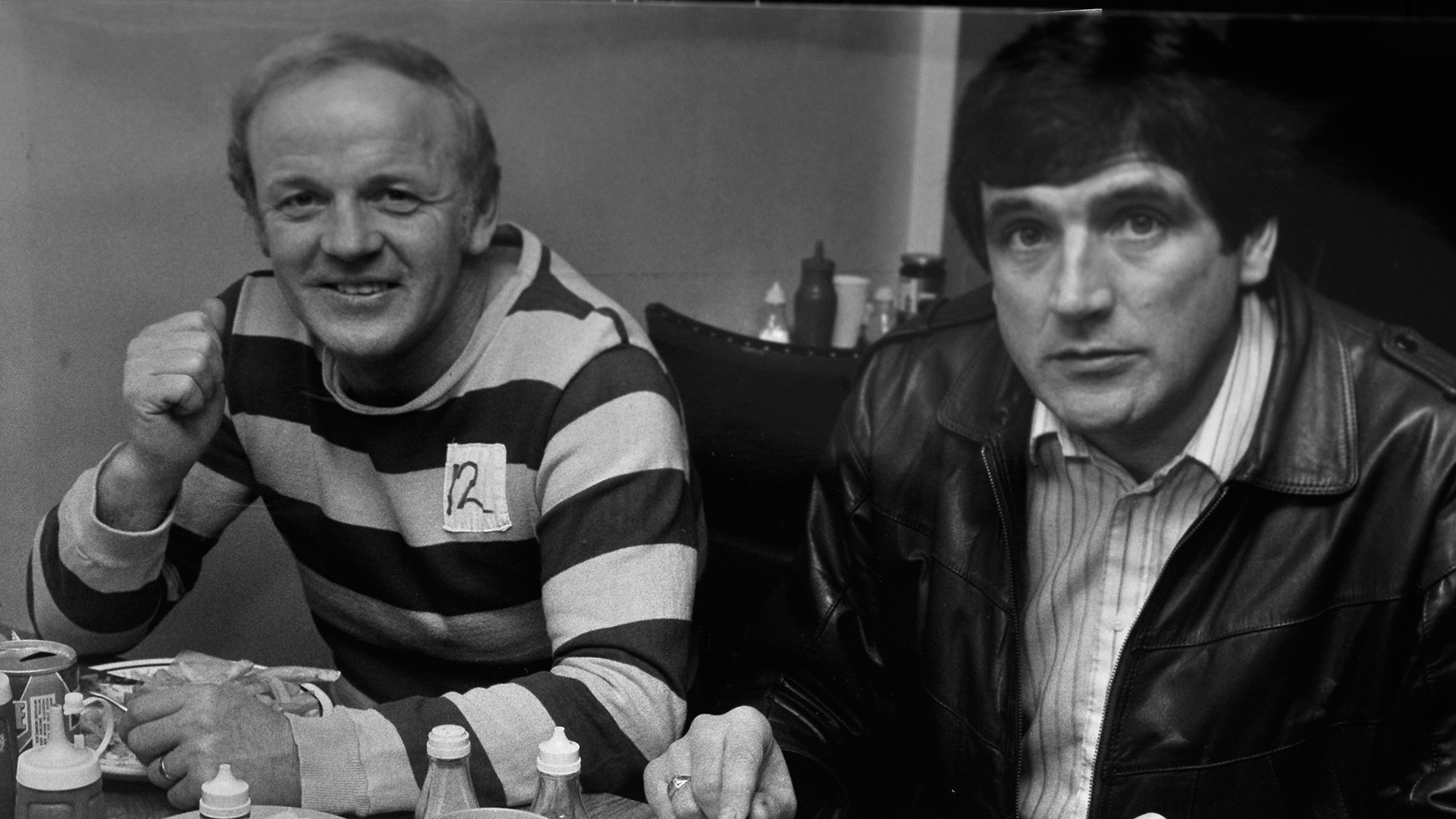 His track suit hung on him because he was so thin.  He’d been playing at outside left and inside left, but in truth, had hardly blossomed between the ages of 15 and 17.  Even so, I was struck by his keenness to work hard and try to impress.  It is often the case in this game that when star schoolboy players join a professional club they take time to adjust and often don’t make rapid progress in their first couple of years.  But it was always our motto at Leeds to give them another chance... to keep them on for a while longer before deciding whether or not to retain them.

So here we had a youngster of 17 from the North-East, obviously willing to learn and even over-eager to try and make the grade.  He used to come back every afternoon for extra training to try and improve his bad points.  I remember that he was never particularly strong in the air but the thing was, he was working hard to try and compensate.

I took over as manager on a Friday... the following Monday morning I called young Norman Hunter into the office.  He was probably expecting to be told the saddest of all decisions – that we were not going to keep him.  But Norman’s eagerness and dedication had impressed us.  Instead of letting him go, we signed him as a professional.

It was the spur, the confidence boosting jolt that he needed.  We converted him into a left half and, just two years later, I was telling everyone that this boy would play for England one day.  It turned out that I was right. 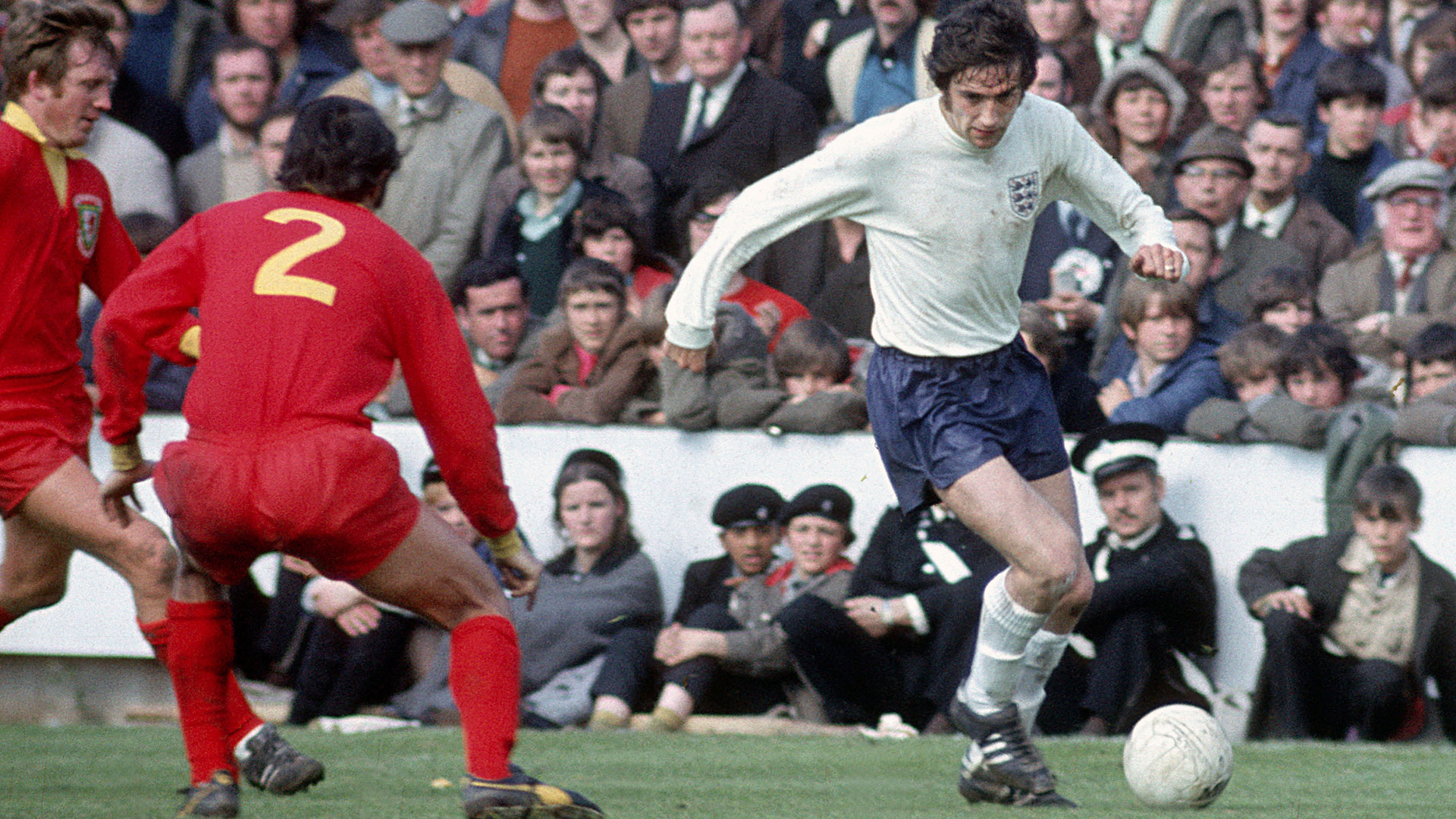 Norman made tremendous strides and, still working overtime at improving, won his way permanently into the first team at the time we were just starting to assemble a young side.  The rest is history of course... how we climbed out of Division Two in 1963-64 and finished second in Division One the following season.  And from then on, honour after honour both at home and abroad.  As I look back on those years I realise how fortunate I was to have the Norman Hunters’ battling it out for the club in the heat of domestic competitions and European finals.  The playing records of those players at Leeds will surely never be surpassed.   Norman Hunter... 500 games in Football League which have brought a Second Division Championship medal, First Division Championship and runners-up medals... 60 plus FA Cup ties which include four Wembley finals... close on 40 League Cup ties, a Wembley final... more than 70 European games including four finals.  That sort of record is still hard to believe but tangible evidence of the player that is Norman Hunter.

So what about Norman Hunter, the footballer?  For me, he’s the best sweeper that’s ever lived... and if you think that’s an over estimation, name another player who’s won so much and played so well in the past.  Many people probably think that all you need to be a good number six is an ability to tackle fairly well and good positional sense.  Not true.  Great players have more than that... and Norman Hunter is a great player.  Norman’s reading of games, his ability to assess situations and dangerous attacks sets him out from the rest.  He covers his colleagues with absolute authority... he patrols his area flawlessly because he seems to be able to sense when dangerous situations are going to develop.  We often used to think he’d been born with a sixth sense... he used to nip potentially dangerous situations in the bud so often that they never developed at all.  A timely tackle, a brilliant interception... that’s part of the Norman Hunter game.

And what about his tackling... the facet of his game that has brought that totally unjustified tag of ‘hard man’?  Tackling, like goalscoring and goalkeeping, like control in the midfield is a specialised art.  I have yet to see a more perfect tackler than Norman Hunter.  Anticipation is part of the art of tackling... but the ability to win the ball cleanly is also of prime importance.  Norman does both of these so easily it’s no effort.  To those who say his tackles leave a lot to be desired I would say that a Norman Hunter tackle is perfection.

He wins the ball cleanly, his timing is that of a 21 jewel Swiss watch.  It seems no effort when Norman wins the ball.  People would say he uses his physique rather than his feet in tackles... that’s not true.  One of the hardest things to do in football is win the ball cleanly and keep it under control.  If you can do that, you can do almost anything.  Norman Hunter has been doing just that for the last 10 years.

Norman Hunter has seldom made headline news because of the position he plays.  It’s not often you read about defenders.  A hungry public would rather read about the hot shots and ace goalscorers.  But defensive skills are equally important.  It’s said of Norman that he is one-footed... in a sense he is because so perfect is that left foot that he never needs to use his right.  But he can... and a telling right foot pass from Norman Hunter has often taken opponents completely unawares. 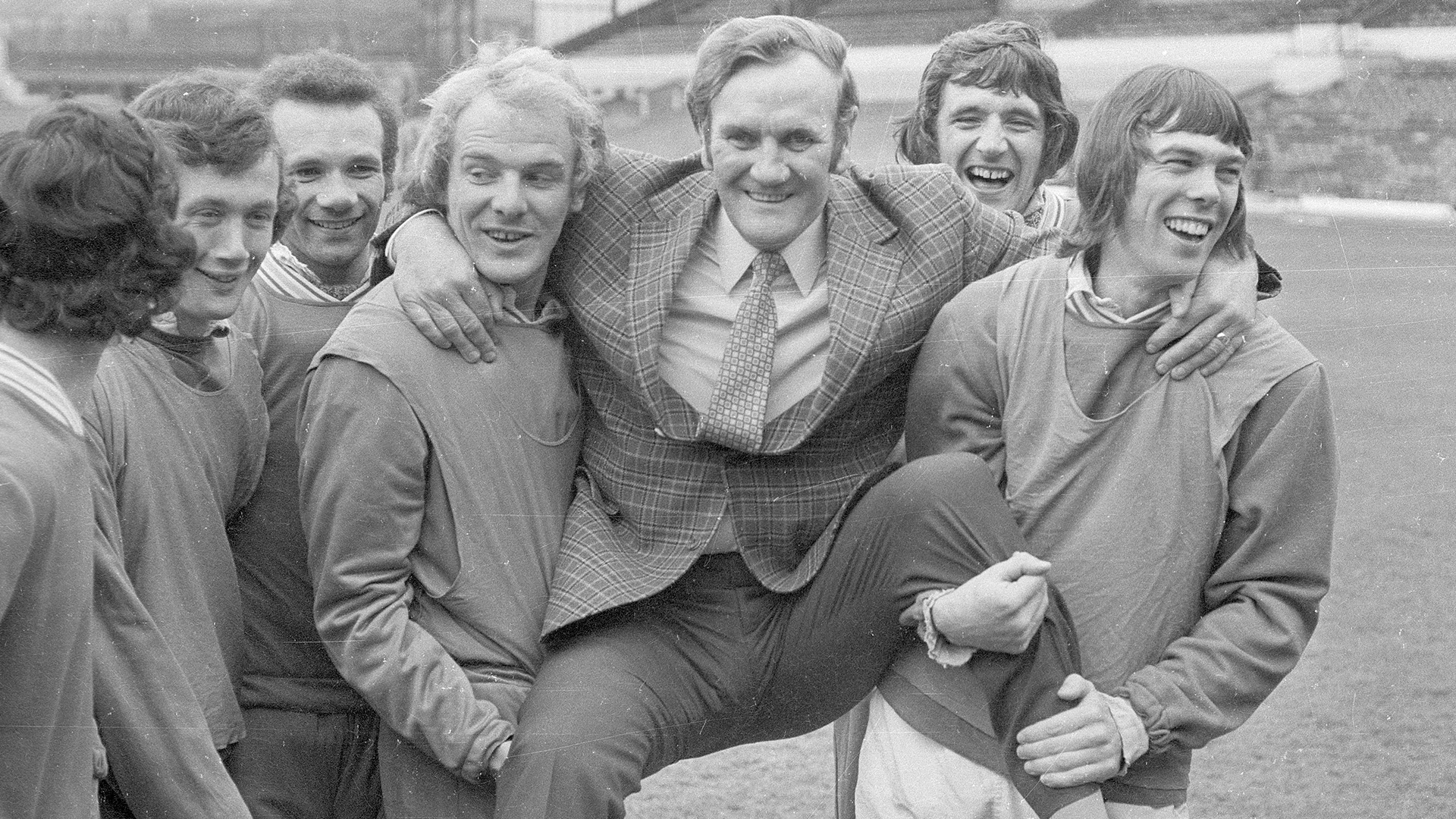 Ask any member of the Leeds United training staff about Norman Hunter.  They will tell you what a fantastic job he’s done for the club over the years.  Until this season, he’d only ever missed five games through injury – and what a record that is! He’s played with swollen ankles, with pulls, with colds, with his legs black and blue.  He’s turned out with knocks, with strains, with cuts.  He’s had just about every normal match injury any player could have.  But so determined is Norman that never once has he said he’s unfit.

Norman is a player any manager would give a king’s ransom to have on his staff... the sort of player you dream about.  As manager of Leeds, I knew that every season I would get 55 great games out of Norman Hunter and only five matches when he was just superb!  He thinks deeply about the game and is totally involved in his job out there on the field.  I always remember how, if he’d made a mistake that led to a goal even though we probably won by two or three clear goals, he would always be the last man in the dressing room still looking upset about it.  That is perfection.

I find it somewhat sad that Norman has never been given full credit for his enormous skill.  He’s always been prepared in his role at Leeds to win the ball then gave it to a colleague to build up moves.  Only in the last two or three years have people started to sit up and take notice of his skills when he gives them full reign.  He’s not only a great defender and winner of the ball – but a great passer too.  I always used to say his left foot was so accurate, he could open a can of beans with it.  Well, take a look when he uses his right – it’s capable of doing a lot more than just being stood on.

Someone once said of Norman Hunter that if he had to tell a lie to save his life, his head would fall.  That is another side of him... his warmth and honesty as a man.  I don’t think he’s ever told a lie in his life.  Norman Hunter is the most honest person I’ve ever met.

And he has a competitive spirit I’ve never seen before.  If you play him at anything – be it golf, table tennis, bowls or snooker—you know you’ve got the match of a lifetime on your hands.  This man only plays one way—to win.  That’s being professional.

It used to be comforting for me as I sat watching Leeds United in the heat of domestic of European games.  When the going got tough, when we were under fantastic pressure, winning, losing or drawing, one man was always there.  One man could always be counted on to battle it out until the final whistle.  That man is Norman Hunter... one of the greatest players ever to have lived.’ 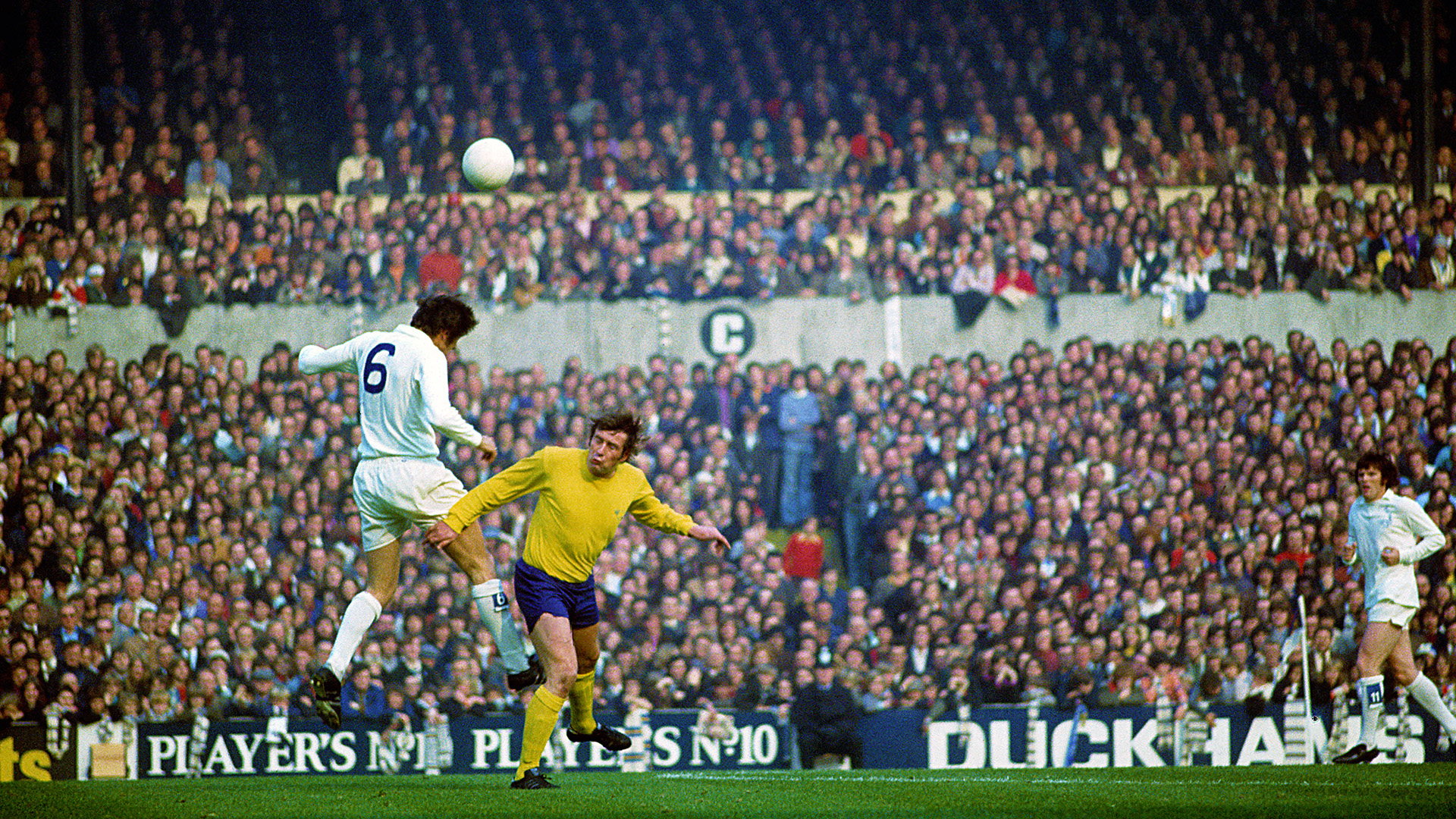