Former players and families accept Freedom of the City Award

The management, players, backroom team and all club staff associated with Don Revie’s unforgettable Leeds United team of the 1960s and 1970s have been awarded the city’s highest civic honour.

This follows a special ceremony held at Leeds Civic Hall this week, which saw players and representatives from the famous Leeds United team of 1967-1974 receive in person the prestigious Freedom of the City Award.

Representing the Revie family included his daughter Kim, and grandson Aiden, whilst also in attendance were members of Paul Madeley’s family. Paul, who was renowned for his tremendous consistency and versatility during his stellar playing career, passed away last year.

Bobby Collins, who died in 2014 and was a driving force in midfield as Leeds secured promotion to the then First Division in 1964, was also represented by members of his family. Leeds under Revie were a famously close-knit team, and playing an enormous part in the team’s success were both the coaching and backroom team.

Family members representing coach Les Cocker who passed away in 1979 and coach Cyril Partridge, who died in 2014, were also present. Also watching the ceremony included family of ‘The Gentle Giant’, John Charles. One of the club’s most legendary players, John, who died in 2004, made 308 appearances in two spells. John was signed by Don Revie in 1962 for his second spell.

A stand at Elland Road and the John Charles Centre for Sport in Leeds are named after the Welshman, and to this day, John is still also celebrated in Italy following his time at Juventus. In attendance from the club to mark the occasion was chief executive, Angus Kinnear, executive director, Paul Bell and honorary president, the Earl of Harewood. 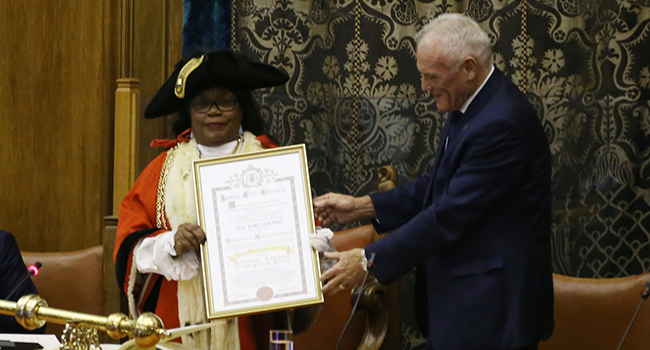 The accolade, which was announced by Leeds City Council leader Cllr Judith Blake as part of the club’s centenary celebrations in October, was granted in recognition of the outstanding achievements of the Revie side and all those who contributed to the club during this period, which in putting the city firmly on the worldwide football map, created a legacy that is still celebrated today.  Paying tribute and unanimously supporting the award was Cllr Blake and representatives of all political groups sitting on the council.

In receiving the award, the Revie team join a small and very select group of people to be granted Freedom of the City. Included in those to receive the honour, which recognises the huge contributions they have made in their respective fields, include; Winston Churchill; Leeds playwright Alan Bennett; Jane Tomlinson, CBE; former South African president Nelson Mandela and cyclist Beryl Burton. In a first for the city, the Leeds United football team 1967-1974, are the first ever group to receive such an honour, and their name is now displayed proudly on the Freedom of the City wall of honour in Leeds Civic Hall.

From the 1967-1968 season which saw The Whites pick up their first major trophy following a 1-0 win over Arsenal at Wembley in the League Cup Final and also an Inter Cities Fairs Cup, Leeds, under the meticulous and watchful eye of Revie, went on to become one of the most admired and feared teams at home and abroad.

During this period, the club won two league championships in 1968-1969 and 1973-1974, another Inter Cities Fairs Cup in 1971 and an FA Cup in 1972. They also finished runners up in Division One three times, twice in the FA Cup and also in a 1973 European Cup Winners Cup final marred in controversy. Revie’s men also reached the semi-finals of the European Cup in 1970. During ‘The Don’s’ last season at the club in 1973-1974, Leeds in winning Division One, went on a 29-match unbeaten run.

As part of the celebrations to mark the Freedom of the City Award, two of the city’s most iconic buildings, Leeds Civic Hall and Leeds Town Hall, were also lit up on the night in the colours of blue, white and yellow. 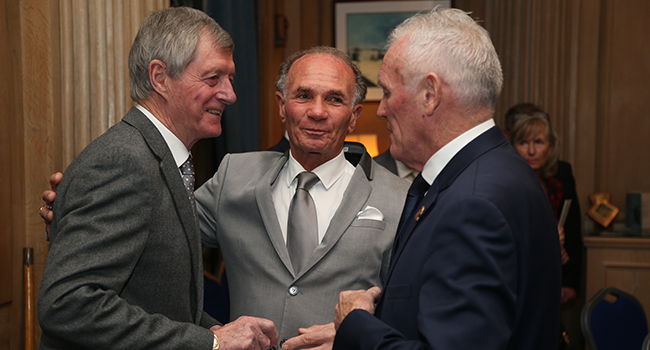 “The granting of a Freedom of the City Award is certainly not something that is an everyday, regular occurrence in Leeds. It is only reserved for those individuals and now groups who through their actions and deeds have achieved something very special in their respective fields, and there is no doubt that the accomplishments of Leeds United from 1967-1974 certainly meet this high benchmark. To see players and representatives from the Revie era present to receive the award was a truly lovely moment and one they undoubtedly deserve.”

“We are very much looking forward to what will be a fantastic occasion to award the famous Revie side with the Honorary Freedom of the City of Leeds. It is an incredible gesture from Leeds City Council to give this accolade to Don Revie and the team who had the most successful era of success to date in our 100 year history. This award recognises the enormous contributions the entire team made and they are truly deserving of this exclusive privilege."