After an impressive 2018/19 campaign, which saw Ryan Edmondson score 20 goals and help our U23s win the PDL-National title, the young striker reached a new milestone on Thursday as he made his England debut.

Not only did the Leeds-born striker become the latest to wear the number 9 shirt, but it took him only 55 minutes to bag his first international goal for the U19s against Greece.

We caught up with him for a quick chat about how he's found the last week with Paul Simpson's England side.

Ryan, congratulations on the England debut and goal! How are you finding your first training camp with the Young Lions?

RE: "Yeah, being away with the lads has been a really enjoyable experience. It's amazing to be able to have the opportunity to be part of something like this, and to represent your country is a massive honour. It's all a bit surreal to be honest.

"I didn't know any of the players in the age group that I'm currently with, but I feel like I've settled in well with the players, and the coaches have really helped a lot."

How did you find out that you were going to be starting the game against Greece, and what were your thoughts heading into your debut?

RE: "It was in training the day before the game, we went through our shapes etc. and then the team got announced. I was pretty shocked as I wasn't expecting to start,﻿ so it's been absolutely crazy.

"Just playing football is a dream for me, but to do it for my country, train with amazing coaches, and to play alongside great players, it's a privilege and I really count myself lucky. I've just got to keep my head down, keep working and hopefully more appearances will come."

How proud has your family been having a Young Lion in the household?

RE: "Me and my dad both got a bit emotional about it, as only a few years ago it was a dream that we had been discussing, and now for it to become a reality, they've just said they couldn't be prouder. They're a big support for me, and although it's been a bit crazy, they also remind me that now is the time to knuckle down and work hard." 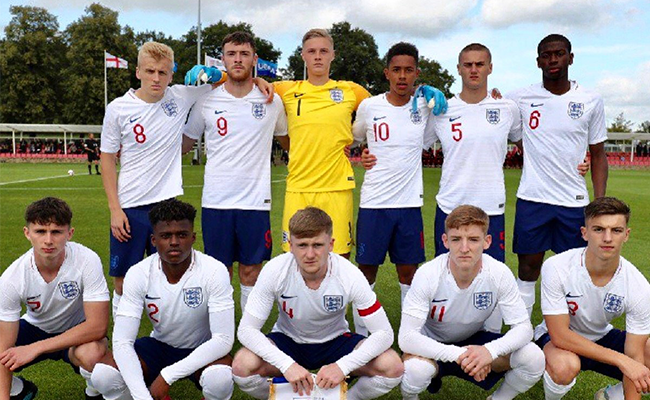 What was it like walking out onto the St George's pitch as an England player?

RE: "Even seeing the shirt hanging up in the dressing room was something else. Seeing the number 9 on the back of an England shirt, and knowing that I was going to be putting it on, was just an unbelievable feeling. Then to walk out as an England player is something I've just always dreamed of."

"The first 5 to 10 minutes I was probably a bit nervous. I'd never been to St George's before, but I think that's the same for a lot of players, and once you put it to the back of your mind, you settle into the game, and I really enjoyed the experience as a whole."

Did you feel much weight wearing that number 9 shirt? Does it cross your mind about all the other players who have worn it before?

RE: "Yeah definitely. I think back to the 2018 World Cup with Harry Kane wearing it. Even now seeing him walking around the St George's complex, is absolutely unbelievable to me, so to be able to wear that shirt, and to score in it, it's all just incredibly surreal."

Were you aware that you had Gareth Southgate and England's senior team watching you from the sidelines?

RE: "I wasn't aware to start with, but then once we settled into the game, I just looked over and saw them, it was a bit of a shock. I wasn't really expecting that, but again, to be able to play in front of Gareth and the lads is something that will always stay with me."

🦁 Makes debut for @England
🎯 Scores after 55 minutes against Greece
🔥 What a day for @Ryan_edmondson9! pic.twitter.com/wbij6HKlAJ

It didn't seem to affect you as you got on the scoresheet! What was it like to score on your England debut?

RE: "That was even more unbelievable than playing! To be able to score for your country in a game, and one that put us into the lead, was just crazy. At that point, I was just thinking of the team rather than my individual achievement. Now reflecting back on it, to put us 2-1 up and having my family there to enjoy it, it's something I'll keep with me, strive off, and use to work towards the next step."

What's been the biggest thing you've learnt so far being away with the national team?

RE: "Probably to never doubt yourself. A lot of the times when I've stepped up another level, I might have done, and it sets yourself back a little. I've realised that if I go into new experiences with full confidence, then you get the results for it, like getting on the scoresheet and getting an assist. The coaches have really tried to drill into us about playing with confidence, to express ourselves through our play, and they keep reminding us that we've been selected for a reason, which just gives you a big push as a player."

What are you hoping to get out of the rest of your time with England?

RE: "We're about to fly out to Germany, and I'm excited for my first international trip. ﻿Hopefully I can get a few more minutes under my belt, and fingers crossed, get another goal. Most of all though, I'm just wanting to get as much out of the training session as possible, so that I can take it back to Leeds, and kick on with the rest of the season."